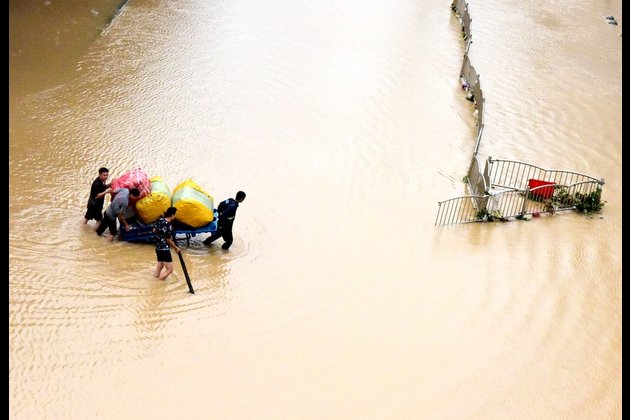 BEIJING, July 21 (Xinhua) -- Chinese authorities on Wednesday raised the emergency response for flood control to Level II, the second-highest level in the response system, as heavy downpours continued to lash the central China province of Henan.

The rainstorm has caused the water level in a reservoir to rise rapidly, said the ministry, adding that all residents downstream were relocated in advance.

From 8 a.m. Saturday to 8 a.m. Wednesday, the average rainfall in Zhengzhou was 458.2 mm, with accumulated precipitation in some areas even surpassing the city's total average yearly rainfall, the China Meteorological Administration said.

Chinese President Xi Jinping on Wednesday demanded that authorities at all levels must give top priority to ensuring people's safety and property, and carefully and strictly implement the flood prevention and disaster relief measures.

Xi, also general secretary of the Communist Party of China Central Committee and chairman of the Central Military Commission, made the remarks in an important instruction after continuous heavy rainfall hit regions including central China's Henan Province, causing heavy casualties and property losses.

Since July 16, over 1.24 million people have been affected by the extremely heavy rainfall, and about 164,710 people have been relocated to safe places, said Xu Zhong, director of the office of the Henan provincial flood control and drought relief headquarters.

China has a four-tier flood-control emergency response system, with Level I being the most severe.

Government bodies, organizations, and companies have been moving quickly regarding emergency work in Henan Province.

The MEM has dispatched a working team to the affected areas in Henan to help local authorities with disaster relief work.

A rescue team of 1,800 firefighters has been deployed to the flood-hit region from seven neighboring provinces, together with boats, pumping vehicles, and flood rescue kits.

The heavy rainfall has caused cuts in electricity and coal supply shortages, the National Development and Reform Commission (NDRC) said.

By 8 a.m. Wednesday, the power supply was restored to 450,600 households, according to the NDRC.

The All-China Federation of Trade Unions (ACFTU) immediately activated its emergency response and allocated 2 million yuan (about 308,475 U.S. dollars) to its Henan subsidiary to assist the disaster-affected employees.

The ACFTU said it would pay close attention to the disaster conditions and is well-prepared for future relief work.

The State Post Bureau (SPB) also launched an emergency response timeously, calling for preparations for heavy rainfalls and efforts to ensure the safety of employees in the express delivery industries.

By 9 a.m. Wednesday, no casualties were reported in the express delivery sector in Henan Province, said the SPB.

Traffic has been disrupted in up to 30 sections of national and provincial highways in Henan due to flooding and collapsed roads, the Ministry of Transport said.

As of 7 a.m. Wednesday, 26 expressways in the region have reported partial closures, but there are not currently high numbers of vehicles and travelers stranded, said the transport ministry.

Floods and downpours have also affected flight and train services. With a red alert for flight delays in place from 8 p.m. Tuesday to noon on Wednesday, all flights due to land at the airport in Zhengzhou were canceled.

Parts of the Zhengzhou-Xi'an high-speed railway and the Lianyungang-Lanzhou railway saw tracks and equipment flooded, as well as trackbed collapses, said the China State Railway Group.

To restore the storm-damaged communication networks in Zhengzhou, local telecommunication companies rushed to repair at least 6,300 base stations and 275 kilometers of optical fiber cables as of 10 a.m. Wednesday, the Ministry of Industry and Information Technology said.

China's national observatory Wednesday morning renewed an orange alert for rainstorms, the second-highest alert in its color-coded weather warning system, in many parts of the country, including Henan.

From Wednesday morning to Thursday morning, heavy rains and rainstorms will continue in Henan and its neighboring provinces, the observatory said. Parts of Henan and Hebei will see rainstorms with up to 280 mm of daily precipitation.

The observatory warned that some areas are likely to see over 70 mm of hourly rainfall, accompanied by thunderstorms and gales.