All hands on deck as rainstorms lash Henan 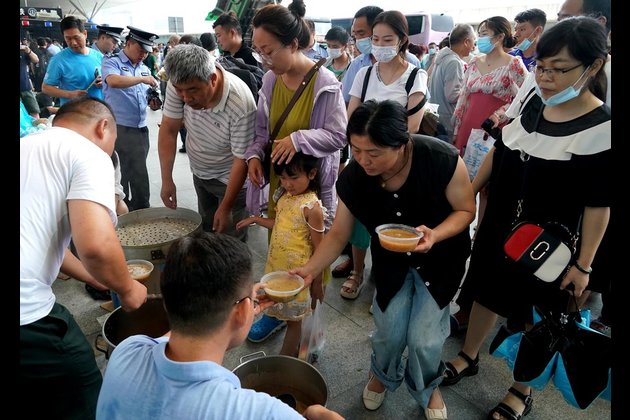 ZHENGZHOU, July 21 (Xinhua) -- About 550 people stuck in a train stranded due to floods in central China's Henan Province let out a sigh of relief after emergency food reached them.

As downpours clobbered the province, there was no hope for the train -- K226/7 -- either to continue the trip or go back as it remained stranded in the suburb of Zhengzhou, the provincial capital.

"Yesterday, the waterlogging on the road was so severe that it submerged car roofs. Commodities at nearby groceries flew off shelves as we rushed to buy relief materials for the stranded passengers," said Cheng Fei, a local railway staffer with China Railway Zhengzhou Group Co. Ltd in the city.

Food including bread, milk, sausages and instant noodles from railway authorities and staff was sent to passengers early Wednesday morning.

"Now that the rain has stopped, we are allowed to get off and buy food," said a passenger surnamed Yang.

Floods and downpours have severely disrupted railway services in Zhengzhou, a transport hub in central China. Parts of the Zhengzhou-Xi'an high-speed railway and the Lianyungang-Lanzhou railway saw submerged tracks and equipment, as well as trackbed collapses.

The train was not the only one to be hit by the sudden barrage brought by days of heavy rainfall.

Authorities on Wednesday raised the emergency response for flood control to Level II, the second-highest in the response system. More than 500 residents have been relocated to a safer place from a flooded subway in Zhengzhou. Twelve persons were killed and five others injured in the subway accident.

A cinema in downtown Zhengzhou, the city hit hardest by torrential rain, stepped in to help by providing temporary shelter and overnight stay for more than 1,000 residents stranded in the heavy rainstorm since Tuesday evening, with hot water on offer.

The Ministry of Emergency Management has sent a team to affected areas in Henan to help local authorities with relief work.

A rescue team of 1,800 firefighters from seven neighboring provinces has been deployed to the flood-hit region, together with boats, pumping vehicles and flood rescue kits.

China's national observatory on Wednesday morning renewed orange alerts for rainstorms in many parts of the country including Henan. Orange is the second-highest level in the country's color-coded weather warning system.

From Wednesday to Thursday morning, heavy rains and rainstorms will continue in Henan and neighboring provinces. Some areas are likely to see over 70 mm of hourly rainfall, accompanied by thunderstorms and gales, the observatory said.